Blockchain: The internet of things

What is a blockchain?

If you have been banking or investing in cryptocurrency for the last 10-15yearss, you may have heard of the term blockchain. Blockchain is the record-keeping technology behind the bitcoin network.

Blockchain technology, a form of distributed ledger technology has been gaining more attention across the globe. It has gotten attention in areas beyond its cryptocurrency root. It is a specific type of database, which differs from a typical database from the way it stores information, blockchain stores data in blocks that are chained together. Blockchain stores new data into a fresh block. Once it is filled with data, it is chained to the previous block. Blockchain stores different types of information, but the most common use so far has been as a ledger for transactions. A blockchain is a decentralized option that all users collectively retain control.

As the Internet of Things applications are by definition distributed it’s only normal that the distributed ledger technology, which blockchain is, will play a role in how devices will communicate directly between each other (keeping a ledger and thus trail of not just devices but also how they interact and, potentially, in which state they are and how they are ‘handled’ in the case of tagged goods).

Blockchain is designed as a basis for applications that involve transactions and interactions. These can include smart contracts (smart contracts are automatically carried out when a specific condition is met, for instance regarding the conditions of goods or environmental conditions) or other smart applications that support specific Internet of Things processes. This way blockchain technology can improve not just compliance in the IoT but also IoT features and cost-efficiency.

What is the difference between using a spreadsheet to store information rather than a database?

Large databases archive this by housing data on servers that are made of powerful computers. Large database servers are built using hundreds or thousands of computers to have power for users to access the database simultaneously.  A spreadsheet or database is managed by an individual that has complete control over how it works and the data within it.

How does a blockchain technology differ from a database? 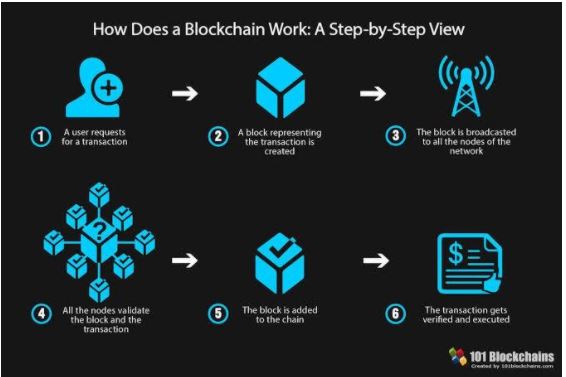 For understanding blockchain, it’s essential to understand how it has been implemented by bitcoin. Like a database, bitcoin needs large numbers of computers to store its blockchain. For bitcoin, this blockchain is just a specific type of database that stores every bit of transaction.  In bitcoin’s case, and unlike most databases, these large computers are decentralized, and each computer is operated by an individual or group of individuals.

In this model, bitcoin is used in a decentralized way. However, centralized blockchains where computers are owned by a single entity do exist. Each node of a blockchain has a full record of the data that has been stored on the blockchain since its inception. The data stored in the node is the entire history of all bitcoin transactions.  If a node seems to be affected, it can use a thousand other nodes to correct itself. In this case, no one node within the network can alter information held within it. The history of the transaction in a blockchain is irreversible.

If one node user tampers with the information in the node, all other nodes would cross-reference each other and easily detect the node with the wrong information. This system helps to establish transparent order of events.

Due to the decentralized feature of bitcoin’s blockchain, all transactions are viewed transparently by having a personal node or by using employees that allow seeing a transaction that occurs live. Each node has its information that gets updated as fresh blocks are confirmed and added. This means you can track bitcoin transactions wherever it goes. For example, if you want to transact BTC to INR. You see every transaction as it goes.

Bitcoin transactions have been hijacked in the past, those who held bitcoin on the exchange lost everything. But due to blockchain, the bitcoin losses were easily traceable.

IoT and blockchain challenges to solve

Technology, whereby mainly security comes in the picture. In an Internet of Things context where IoT security is already a challenge, it’s clear that security needs to be even more looked at. It is important to note though that blockchain is also seen as a way to secure the Internet of Things and, as mentioned, security overall but that is another with several opinions and aspects to cover.

Operational challenges: the business model and the practical aspects as this requires many agreements and of course many actors too in a broad ecosystem. Just think about that IBM logistics example.

Legal and compliance issues. Bennet among others refers to responsibility issues in case of actions that are taken by devices, based on a rule that is automatically executed by a blockchain-based application, triggered by another blockchain-based application (you see the complexity). And then there is the mentioned example of smart contracts. As you know contracts are far from easy, even outside this IoT and blockchain context.

How secure is blockchain technology?

Blockchain accounts for the issues of security and trust in several ways.

After a new block has been added to a chain, it’s very difficult to go back and change the data unless there is a concrete agreement between the node users. That’s because every block has its hash. A hash code is a code that is created by a math function. A hash code turns digital information into a variety of numbers and letters. If data is edited in a blockchain, the hash code changes as well. Hash code is an important code that is responsible for the security of a blockchain.

Blockchain as the answer to IoT challenges

In the Spring of 2017, Nicolas Windpassinger, author of ‘Digitize or Die‘, an IoT book for digital transformation leaders, wrote about the practical aspects blockchain can address in IoT and how blockchain can accelerate the evolution of IoT.

Windpassinger: blockchain technology promises to be the missing link enabling peer-to-peer contractual behavior without any third party to “certify” the IoT transaction. It answers the challenge of scalability, a single point of failure, time stamping, record, privacy, trust, and reliability in a very consistent way.

Blockchain technology could provide a simple infrastructure for two devices to directly transfer a piece of property such as money or data between one another with a secured and reliable time-stamped contractual handshake. To enable message exchanges, IoT devices will leverage smart contracts which then model the agreement between the two parties. This feature enables the autonomous functioning of smart devices without the need for centralized authority. If you then extend this peer-to-peer transaction to human or human to objects/platforms, you end up with a fully distributed trustworthy digital infrastructure.

The main use case of blockchain in insurance is smart contracts and the enhancement of several processes such as claims management. Other applications include fraud management, legally required applications (blockchain is thoroughly looked at in the legal sector as well), and even the usage of technologies in an insurance context.

In the scope of blockchain and IoT, it’s interesting to look at the combination of blockchain and the Internet of Things as it’s used in insurance and will increasingly be, moving beyond the pure telematics model to the connection of real-time IoT data from various perspectives for various intelligent automated insurance policy applications.